Home / From the Beginning

On October 31, 1963, President John F. Kennedy signed into law the Community Mental Health Act (also known as the Mental Retardation and Community Mental Health Centers Construction Act of 1963), which drastically altered the delivery of mental health services and inspired a new era of optimism in mental healthcare. This law led to the establishment of comprehensive community mental health centers throughout the country. It helped people with mental illnesses who were “warehoused” in hospitals and institutions move back into their communities.

Along with this law, the development of more effective psychotropic medications and new approaches to psychotherapy made community-based care for people with mental illnesses a feasible solution. A growing body of evidence at that time demonstrated that mental illnesses could be treated more effectively and in a more cost-effective manner in community settings than in traditional psychiatric hospitals. 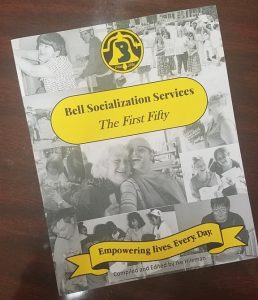 To read more on the history of Bell, consider purchasing* a copy of “Bell Socialization Services – The First Fifty,”  a compilation by Ivan “Ike” G. Hileman, who retired as Bell’s executive director in 2017 after 40 years of service.  Submit a request via the Contact page.

*$20 donation to Bell. Quantities are limited.