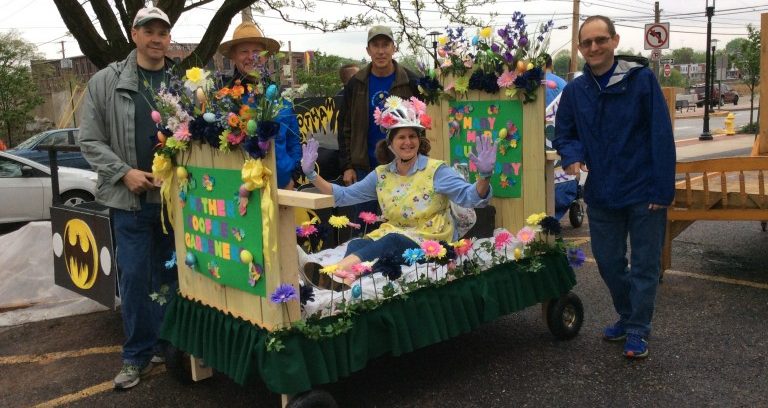 From the course infield, spectators cheered loudly as teams raced their beds around the parking lot at St. John Episcopal Church for the first annual Bell’s Big Bed Race, held Saturday, April 23 in downtown York.   A little rain in the morning didn’t dampen the spirits of those gathered to race or volunteer with the event, and by the time spectators arrived for the 9:00 Parade of Beds, the clouds were clearing.

Seven teams of five members each – four runners and one rider – arrived on the scene early to line up and ready themselves for the rigors of pushing their homemade constructions across the macadam one heart-pumping heat after the next.  Music provided by Weary Arts Group kept everyone energized between rounds, and announcers shared information about Bell’s programs which provide housing supports and residential services to build awareness of the agency’s positive community impact. 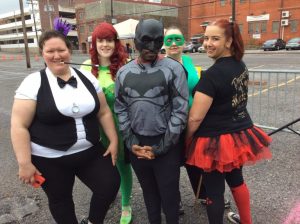 After all the huffing and puffing, a couple crashes at the turnaround point where teams were required to ring a bell secured to the footboard of a bed at the same time negotiating a turn as both teams met at the half-way point, and one bed simply falling apart under the strain of it all . . . the double elimination event came to its end.  The team from Stambaugh Ness was awarded first place, the Royal Square Jokers, second place, and Members 1st Tu-Tu Fruity came in third.

Bell’s own Gotham Bells won the Best Decorated Bed award thanks to an audience “scream-o-meter,”  with Royal Square Jokers picking up the second place certificate. 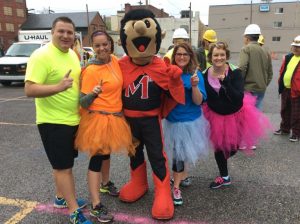 Teams and spectators could already be heard planning for next year’s event.  With lessons learned from the inaugural effort, it’s certain to be an even bigger success.

Even though this year’s bed race is done, you may still DONATE in support of Bell’s Big Bed Race fundraising efforts to help magnify impact!

More photos and video from the race can be found online through the social media hashtag #BellBedRace2016.  Also, check out this link to the coverage by Jason Plotkin of the York Daily Record.