A hand in history: How Bell helped bring the Special Olympics to York County 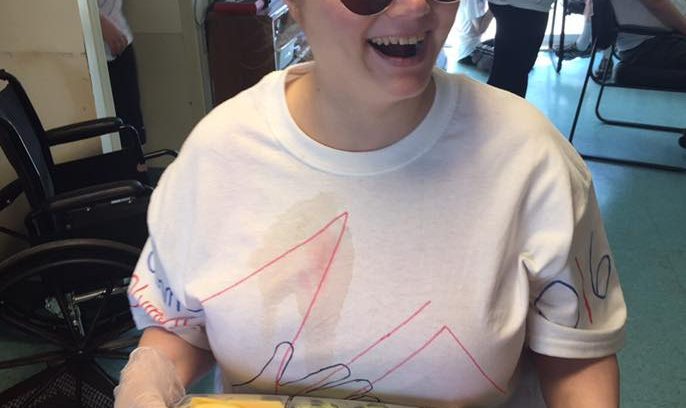 A smile spreads across Shasta’s face as she runs across the gym. She takes aim at the basketball net. The thud of the ball hitting the backboard and sinking a score leads to cheers from the crowd on the edge of the court.

An afternoon on the basketball court is about more than exercise for Shasta, one of Bell Socialization Services’ group home residents. Keeping busy with the York County Special Olympics has become a hobby that helps Shasta develop skills, build relationships and gain confidence in her abilities.

But Shasta might not have been given that chance without Bell. It was in the mid-1960s, when state mental institutions were shut down, that the Mental Health Association of York County saw a need, says Ike Hileman, executive director at Bell.

“It provides a lot of empowerment for our clients to learn a skill,” Hileman says.

Bell Socialization Services started as a social club that later added residential services, treatment and vocational programs, as well as educational opportunities. It was in 1980, when Robert O’Brien, a new board member who moved from New York to York County, Pa., was looking for places where his intellectually disabled son could connect with the community.

While Bell no longer oversees the York County Special Olympics, many of its service users still benefit from the sporting events.

“It’s more than just the games,” Hileman says. “You don’t just go to a track meet. They do training months before. You have volunteers who are getting to work with them.”

Bell’s clients get to be in a friendly environment with people willing and able to help them learn and succeed, he noted.

Ashley Brown, a group home worker for Bell, sees the benefits of the Special Olympics through the clients she interacts with daily.

“I see that in her life, participating in Special Olympics has given her confidence and the feeling of camaraderie,” Brown says of Shasta. “Even though she is not as capable as the other players, she tries her best and her teammates and peers cheer her on and build her up. Without Special Olympics I’m not sure that she would feel as confident in a similar setting.”

For participants like Shasta, there’s a sense of pride in playing and contributing to the team. But perhaps the biggest boost in confidence comes from Shasta’s peers who come to see her compete. They cheer her on from the sidelines.

“She leaves practices knowing that she accomplished something,” Brown says. “She’s so proud when her peers and caregivers come to see what she’s being doing all season. I also think that the games have helped her maintain as much of an active lifestyle as she’s capable of doing. When she sees her peers working hard, she too wants to work hard.”

Organizing a game at the bowling alley seemed like a small thing in 1980, Hileman says. He’s not sure anyone knew that a simple game would turn into a county-wide effort to contribute to the livelihood of York County’s residents.

“It’s great to see the Special Olympics contribute to people’s lives,” he says. “The joy it brings cannot be measured.”

All of Bell’s services  – mental health, intellectual disability, and shelter – follow the psychosocial rehabilitation model, which focuses on assessing individual strengths and needs, setting personal goals, and providing an environment that encourages growth and development.

Bell’s ultimate goal is to help service users live as independently as possible in the community. Find out how you can contribute to the programs that Bell offers.