They’re actually known as the Will Run for Beer (WRFB) group, but when we saw WRFB we couldn’t help putting our name on it, especially when we heard this group of enthusiastic runners decided to add a charitable step to their efforts by, in fact, soliciting donations for Bell.

Three guys from the WRFB group – Doug Barnett, John Katora, and Josh Jamison– signed up for the Garden Spot Village Marathon to be held March 31 in New Holland, PA. The runners set a goal to raise $500 each which they would donate to Bell Socialization Services, making the total contribution to Bell $1500 if they are able to reach their goal.

What started out years ago as two runners from Dallastown, the Will Run for Beer group has grown into a dedicated team of nearly 20 runners who get up bright and early to run the roads and trails of York County together. 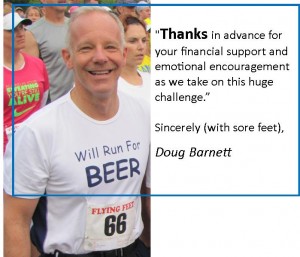 About three years ago the group decided to give back to the running community of the greater York area by taking over the duties of coordinating one of the York Road Runners Club winter series events. Members of the WRFB group decided to give back to York again by running the Garden Spot Village Marathon for Bell.  Six additional WRFB members are signed up to run the half marathon portion of the race that day.

While these guys (and occasional gals) are dedicated runners, 26.2 miles is not your average morning run. They are training vigorously for their marathon on March 31, and they’re not planning on coming in last.