Home / Stories / Positive Impacts / Be Patient with the Process

Be Patient with the Process

Let me tell you about Bernie.

First of all, a greeting from him is like being wrapped in a big purple hug regardless of whether you’re even physically embracing.  He’s almost always decked out in Ravens gear and his warm smile and sense of humor will brighten the cloudiest of days. (That’s him in the purple shirt, center of the photo above.)

Bernard Hartlove was born and raised in Baltimore and he keeps that Charm City pride going strong even though his childhood included physical, verbal and sexual abuse, and abandonment.  As a teen he ended up in a special school for kids with emotional issues and behavior problems. His first of nine suicide attempts occurred when he was just 19. While in the hospital Bernie received a diagnosis of bi-polar disorder and, not long afterward, what family he had left gave up on him and Bernie became homeless.

Still, he persevered. He was resourceful and smart, found work, and got connected with Omni House, a mental health clinic in Maryland with outpatient and residential services.  He learned how to set goals for himself and got a job in hospitality management.  But getting his medications right was a near constant struggle and the cyclical nature of his mental illness reared its head and dragged him down over and over again.

More attempts to take his own life, more hospital stays, more experiences of homelessness. And then, a friend encouraged Bernie to move to York, where he learned about Bell Socialization Services.

Five years in, Bernie is figuratively and literally in a very different space.  Getting involved with Bell’s mental health social rehabilitation program was a challenge off and on but his involvement helped him navigate life with a mental illness. He reports that he’s established a sense of normalcy thanks to the structure and support of the programs and the people he’s met. He developed tools to be successful and not only has he reached his goal of attaining permanent housing in the community, he’s also giving back. 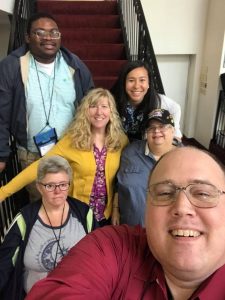 Bernie stays connected to Bell by facilitating groups like Responsible You and environmental science, and he initiated a self-advocacy group titled Sailing Your Own Ship. He is involved with peer-to-peer training presentations through the local chapter of the National Alliance on Mental Illness (NAMI), is co-chair of the Community Care Behavioral Health (CCBH) Advisory Board, and has taken on leadership roles with Bell’s Oasis House, including being selected as a regional representative to the Central PA Clubhouse Coalition.

When asked what he would say to someone else struggling with mental illness, Bernie shared what someone once told him:

Good words to live by for all of us.

Thanks, Bernie, for agreeing to share your story and for your continuing and inspiring participation with Bell.