The Initiative to Stay Healthy 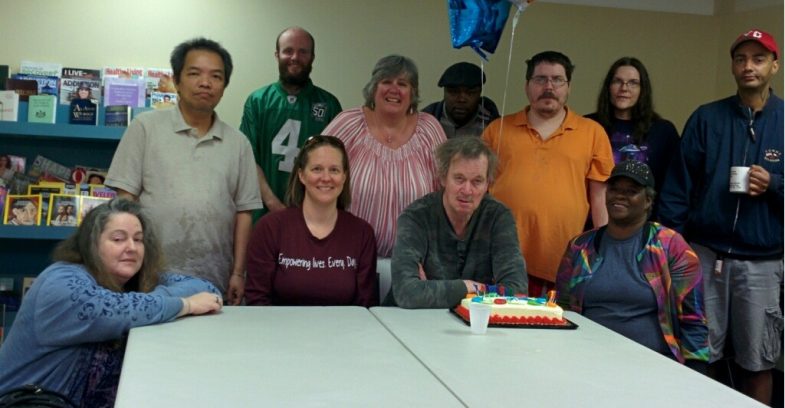 Michael Kelly has been connected to Bell since he was 16 years old. He doesn’t recall the specifics of how it came to be, but says someone “called my step-mom and I was allowed to go to Bell ever since.” That was 44 years ago.

When Michael was younger, he says “for a lot of years I had low self-esteem.” Michael has been with Bell’s Assertive Community Treatment (ACT) program for the last 13 years, where he says, “The ACT team taught me how to have high self-esteem and they really helped me bring it back up.”

Since participating with Bell, Michael says he has achieved many goals he’d set for his life. Through Bell’s CRAS program, he has lived in a group home, and lived in an apartment program. “I completed everything,” he said.

For some time he worked for Bell by cleaning offices. He also worked for two and a half years at the old Hills Department store where he stocked shelves, working in the men’s department for 20 hours a week. Michael believes that through his own hard work, initiative,  and with the help of his case managers, he learned the skills necessary to excel in those positions of employment.

One thing Michael is particularly proud of is being able to get around the community well. He knows the bus system, he says, and is able to go grocery shopping. “I took the initiative to go down there and get my shopping done. But I always have a heck of an initiative with everything that I do.”

Michael really enjoys being able to cook and it’s something he gets to do with staff members at ACT. “I like to come out on Mondays to help with the cooking; I love cooking anything and everything. Meatball chili is usually pretty good,” he said.

Kris Stroup, Bell’s Director of Mental Health Services, said that over the last 30 years that she’s known Michael he has really shown improvement. “He really knows his way around the community and loves helping out here at ACT,” she said.

Michael is currently in the process of obtaining his GED and going back to school. “I do want to go back to school. I’ve been working on my GED since 2018 and I hope to finish it by summer 2019,” he explains. He sees himself as a very strong-willed person who “can handle anything.”

He believes that with all of his successes and achievements he could write a book about his triumphs in the mental health field and in other things in his life, like his relationship with his girlfriend of 18 years.

But most of all, he’s very thankful for his father and step-mother for encouraging him to connect with Bell.  “If I wasn’t part of Bell, I would’ve been institutionalized and I’m grateful to be here.”