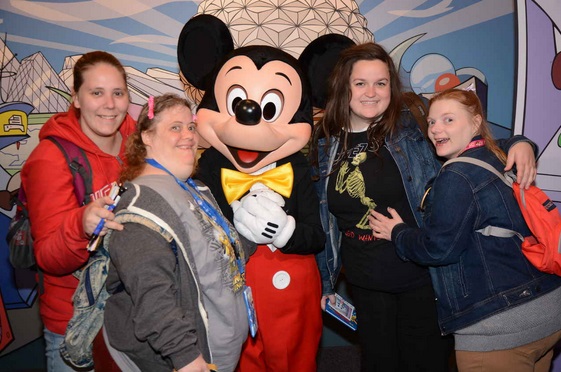 Shasta Douglass and Vicki Lawver spent hour upon hour for months plotting out every aspect of a trip they wanted to take.

It all started last year when Shasta saw a commercial for Disney World on TV and signified that she wanted to ride the rollercoasters.  Bell staff in the community living home where Shasta lives noted her keen interest and asked Shasta if she wanted to take a trip, which she heartily confirmed. On an outing with other service users in Bell’s intellectual disability program in late summer, Shasta talked with Vicki about her trip to Disney and asked Vicki if she would be able to join Shasta on her trip.  The two started planning their trip right away!

As soon as their adventure was booked the girls had trip-planning DVDs sent to their homes.  When the DVDs arrived they watched them closely and let staff know which things they specifically wanted to do on the trip.  In the week leading up to the trip they helped pack their bags and finalize details. 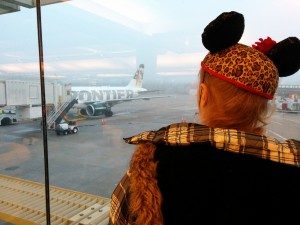 Neither Shasta nor Vicki are strangers to travel and they were excited to board a plane again for this journey.  On the morning of the trip, Senior Residential Service Worker (RSW) Megan Selmer, Shasta, and I met at Vicki’s home and all left for the airport sporting brand new Minnie Mouse ears!

At the airport, Shasta and Vicki helped staff check the bags and then headed toward their gate to wait for the flight.  When it came time to board the plane, Vicki was a little nervous but with some encouragement she boarded and chose a window seat.  As the plane lifted off the ground, both Shasta and Vicki cheered and clapped which, honestly, helped to console me a bit as the plane took off.  While in the air, the gals watched movies and enjoyed some snacks.  When it came time to land they plastered their faces to the window trying to see the town below.

Once the plane landed and we disembarked, we all hopped on a bus and headed to the All Star Music Resort, checked in, and got settled.  After a night of relaxation, everyone was up bright and early and ready to head into the theme park.

Over the course of the six days in the park, Shasta and Vicki explored Magic Kingdom, Hollywood Studios, Epcot Center, and Animal Kingdom.  Shasta spent most of her time riding rollercoasters, shopping and people watching. (She even ran into someone she knew from back home proving it really is “just a small world afterall.)    Vicki spent most of her time exploring the parks, shopping and meeting characters.  Vicki definitely enjoyed meeting her favorite characters (such as, Goofy, Cinderella, Tinker Bell and many others) while Shasta was more interested in her favorite rides such as The Mount Everest Expedition and the Tower of Terror.  In their down time at the hotel they enjoyed the food court, swimming, and participating in Wii dance competitions by the pool.

Disney staff did an incredible job accommodating any of our special needs.  They did everything they could to help make our trip easier in every way, including offering us a rider swap pass so that Shasta could ride multiple rides more than once while Vicki shopped. Staff overheard us discussing Vicki’s birthday one evening and made arrangements to have Goofy call her in the hotel room and wish her a happy birthday.  What a thrill!  Every employee we came in contact with at the airport and the resort/hotel had a positive attitude and was willing to go above and beyond to help us with everything we needed.

Shasta and Vicki had such an amazing time on their trip they are already planning their next escapade together. Who knows where they might end up!

Special thanks to Angie Weaver, Intellectual Disability Residential  Services (IDRS) program coordinator, who did an excellent job being our “travel agent.” Her assistance was invaluable, including helping us choose where we stayed, picking out the meal plan, giving us an idea of what to expect, and finding the best deals on everything! Couldn’t have done it without her.

Story and photos by Bell employee, Ashley Brown, who serves the agency as an RSW in the IDRS program. Ashely has worked at Bell for about 1 1/2 years, and is the chair of the Social Media Team.   This was her first trip to Disney World.